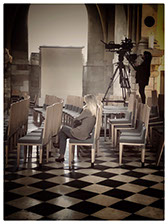 Andreea Butucariu is a violinist and a performance major graduate of the University of Montreal, Indiana University and Montclair State University. Aside from music, mathematics and languages always fascinated her. At the end of her studies, already fluent in several European languages, she was looking for her real vocation, that she felt would combine all the things she enjoyed, came natural to her and she had trained for. One day, she had a Eureka moment: it was Arts Management! Her first position was as an artist manager in Hamburg (Germany) at Impresariat Simmenauer, one of the most respected agencies in the classical music field. In April of 2009 she left Hamburg and moved to Berlin (Germany), where she founded her own agency: EAS Musikmanagement GmbH. EAS stands for European Artistic Services, home to several arts organizations under one roof meant to be created gradually. In addition to the work with the Musikmanagement and the other EAS arts organizations (the recording label eaSonus and the concert series Andalucía Clásica), Andreea was also based in Sydney (Australia) for half a year working with the Australian Chamber Orchestra. There she planned and conceived the concert programs and the Season 2016 of the ensemble, alongside artistic director Richard Tognetti. 2016 also sees the beginning of a new era within the Musikmanagement, as Andreea starts to work with conductors.

She teaches at the «Instituto Complutense de Ciencias Musicales» in Madrid (Spain) and lectures on the topic of Artist Agencies, Artist Management, the Classical Music World behind the scenes and what it takes to build a career in music in different Conservatories.